Deemed to be a pioneer in the field of up and coming smart lamp technology, the FLUXO lamp by Luke Roberts brings forth a potent mix of both white and multicolored light. Conversely, the lamp is limited in terms of connectivity and home automation compatibility as well as all around inventive technological characteristics. 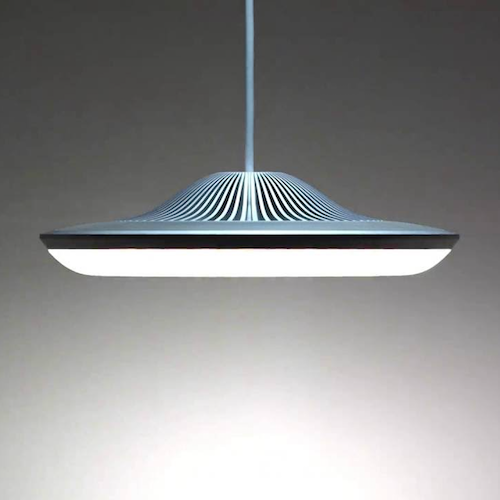 THE GOOD / Two light sources working together as one unit bring about a compelling display of light in shades that are both efficient and amusing. Additionally, the lamp aids in eliminating wasteful energy consumption by powering down on its own through the use of sensors when a presence is not detected.

THE BAD / An inability to link with home automation devices and hubs, such as Apple’s HomeKit or Zigbee, significantly alters this lamp’s role in smart homes. In fact, there is little about the lamp on the inside or the outside that gives any indication that it was designed to be a smart lamp—let alone the world’s smartest.

THE BOTTOM LINE / The FLUXO Lamp by Luke Roberts is presented to the world as an ingenious innovation that is highly superior to every smart lamp that has come before it. With a multi-colored uplight and an ivory downlight in place, the lamp undoubtedly meets basic lighting requirements. As a long-term fixture, however, the FLUXO does not permit the type of connectivity or practicality that is desired in a smart lamp. In this case, placing the “smart” label on the lamp is an advertising ploy, in place of an accurate description of functionality.

Initially, viewing the FLUXO lamp may have you questioning whether it is a lamp or a low-budget, sci-fi movie prop. With its bland color scheme, top heavy saucer-like shape and thin cable cord, it unquestionably bares resemblance to a fictional flying saucer suspended in the air.

Spawned from anodized aluminum, the FLUXO contains a rounded heat sink that is intended to keep the LED lights from overheating. Consequently, the heat sink is more functional than it is visually pleasing. Inside of the heat sink, a diffuser made of thin glass is in place to assist with lighting. This leaves the lamp appearing mismatched with the top half being a gray tone and the bottom half a white one. Meanwhile, the fixture is suspended from the ceiling with a thin, gray cable that is available in lengths from 3.3-13.2 feet in length. The fixture aims to be viewed as a modern piece though its bulky construction makes it hard to place on a scale of design concepts. 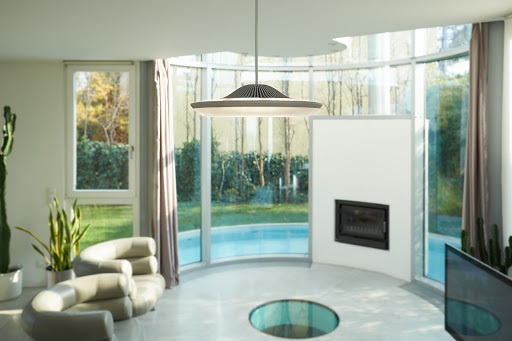 The FLUXO Lamp by Luke Roberts enters your home ready to be put in place and installed. First and foremost, you will need to remove the lamp from its packaging and locate the directions for assembly and installation. As tempting as it may be to dive in and forgot the instructions, stick to the advised plan to avoid problematic mistakes.

Included in the box is a ceiling mount that was specifically designed to hold the lamp. The mount can be affixed to any flat ceiling, although tools will be mandatory to do so. Afterwards, you must then power the lamp on and download the FLUXO app on your iPhone 5 (or newer) or on an Android tablet or phone that is equipped with Bluetooth LE. Sadly for those clinging to older devices, the app will be unavailable, rendering the lamp practically unusable. After the app is up and running, you can create and save your lighting preferences for both current and later use. 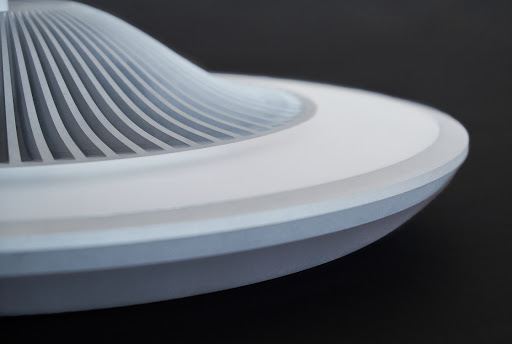 A colorful uplight and a white downlight are fused together in the FLUXO model to forge a 2800 lumen LED presentation of radiance (on par with a 200W incandescent bulb). Electrified by a 100/220 volt universal power supply, the FLUXO lamp’s RGBW LEDs generate 300 divergent light combinations. Practical white tones elicit a productive atmosphere while made-to-order mood lighting supports a calming disposition. Built-in sensors permit the lamp to detect motion as well as environmental conditions to power the lamp on and off while also altering directions.

The FLUXO Lamp by Luke Roberts has been designated by its developers as “The World’s First Truly Smart Lamp”. In spite of this allegation, the FLUXO lamp is incapable of syncing with popular home automation products or wireless hubs. Instead, the lamp is operated fully through an app found on newer model iPhones and Android systems with Bluetooth LE.